Speaking of old structures, this church is surely one of them. Dating from 9th century, this Byzantine style church is a perfect spot for the lovers of good, old architecture. The interior is really simple and includes two complete Roman columns, which are recycled from the Roman forum.

Have you really been to Zadar if you haven't visited Zadar's most famous church - the Church of St. Donatus?

It isn’t one of the most popular symbols of Zadar for no reason. This church has a rich history and is one of a kind in Europe - truly an attraction that you absolutely must visit when you’re in Zadar. The best Instagram pictures are taken right in front of the Church of St. Donatus! The landscape around it is so beautiful and diverse, creating an interesting story out of every photo.

Location of the Church of St. Donatus

The Church of St. Donatus is situated in the Old Town, also known as the Zadar Peninsula, where the Zadar Roman Forum used to be. That part of the city is special because it summarizes centuries and centuries of the history and existence of the city of Zadar in one place! By walking through the city, you'll travel back in time all the way back to the Roman ages, then the Middle Ages, Renaissance, and the present. Truly a sight not to be missed.

The Church of St. Donatus is in the immediate vicinity of other famous tourist attractions, such as the Greeting to the Sun, the Sea Organ, the Cathedral of St. Anastasia and its Bell Tower, as well as the Five Wells Square.

The Church isn’t accessible by car, so if you’re traveling on wheels, we recommend parking outside the City Walls. Affordable parking spaces can be found on Ravnice. It’s situated right outside the walls, perfect for anyone who wants to discover the Old Town. 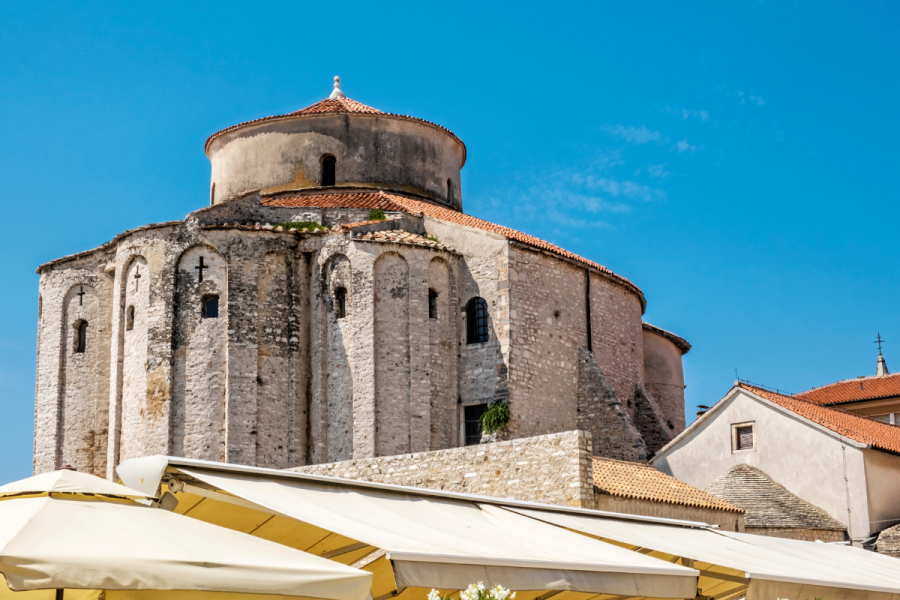 History of the Church of St. Donatus

Originally named the Church of the Holy Trinity, the construction of the Church of St. Donatus began in the 9th century. It was built with the remaining pieces of the Zadar Roman Forum.

With the arrival of the 15th century, the church acquired a new name that has been kept until today - the Church of St. Donatus. It got its name after the bishop who commissioned its construction. A fun fact about it is that it’s the largest Pre-Romanesque building in Croatia, measuring 27m in height and 22m in width. The Church is also an example of Europe's centralized type of the Carolingian period, considered the most significant of its kind in Europe.

In terms of building types, it follows a circular plan from the early Byzantine to the Carolingian court churches. However, it stood out for its originality due to its colossal monument, unusual cylindrical shape, and double interior space.

However, it hasn’t kept its original form as the southern annex was demolished in 1930.

The Church of St. Donatus in Zadar has long been secularized, meaning that it does not hold liturgies and was used as the Zadar Archaeological Museum from the late 19th century.. With its extraordinary acoustic properties, St. Donat has been the setting for Renaissance music festivals for decades. We cover more of this topic below.

How old is St Donatus in Zadar?

Built in the 9th century, the Church is over 12 centuries old. If this church could talk, it would reveal some of the most thrilling historical stories never told. Just by gazing at it, you can feel the mark time has left on it. Yet, it still proudly stands tall as one of the most famous symbols of Zadar and the most visited tourist attractions. 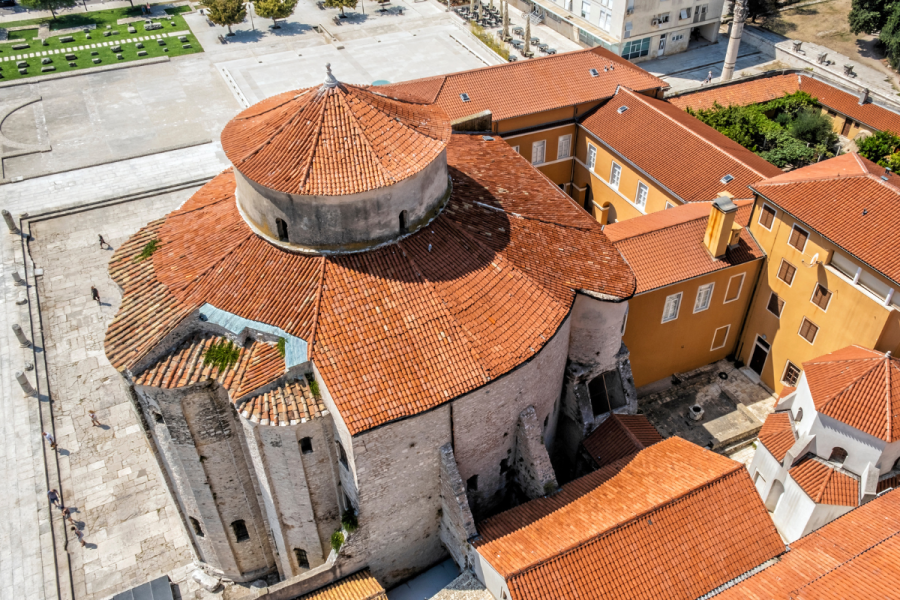 Who was St Donatus?

Due to the fact that he was mentioned in 804, during the time of the Byzantine emperor Nicephorus I in Constantinople, he is considered to have contributed to the conclusion of peace in Aachen, by which the Franks received Istria and Croatia, and the Byzantines received the Dalmatian cities and Venice. He also played a major role in the great autonomy of Zadar and other Dalmatian cities (Kotor, Dubrovnik, Split, Trogir, Rab, Krk, and Osor).

It is assumed that St. Donatus got the idea for the church in Aachen, where he could see the Palatine Chapel, which has a lot of similarities to the Church of St. Donatus.

Moreover, St. Anastasia is probably so greatly respected in Zadar thanks to St. Donatus, evidenced by the inscriptions on the stone beams and the marble reliquary from the chapel of St. Anastasia.

He died in 811 and was buried in the Church of St. Donatus. At that time, the church was known under the name “the Church of Holy Trinity”. His remains were put under the main altar of the church, and after the French invasion of Zadar, they were moved to the Cathedral of St. Anastasia, where they still remain even today.

From all this, we can conclude that bishop St. Donatus deserved to have such a glamorous church named after him. During his lifetime, he contributed a lot to this city, and his influence can be felt even today just by looking at the church. He is one of Zadar's favorite saints who will be remembered for many years to come.

Inside of Church St Donatus

The glorious Church of St. Donatus interior is truly something you have to see for yourself to understand its uniqueness. This church has the structure of a cylinder within a cylinder. A gallery is comfortably seated on the first floor. The conical roof is internally supported by 6 pilasters and 2 columns that were part of the Roman forum.

Due to its structure, it has excellent acoustics. For this reason, the Church of St. Donatus has been the host of many musical events these years. 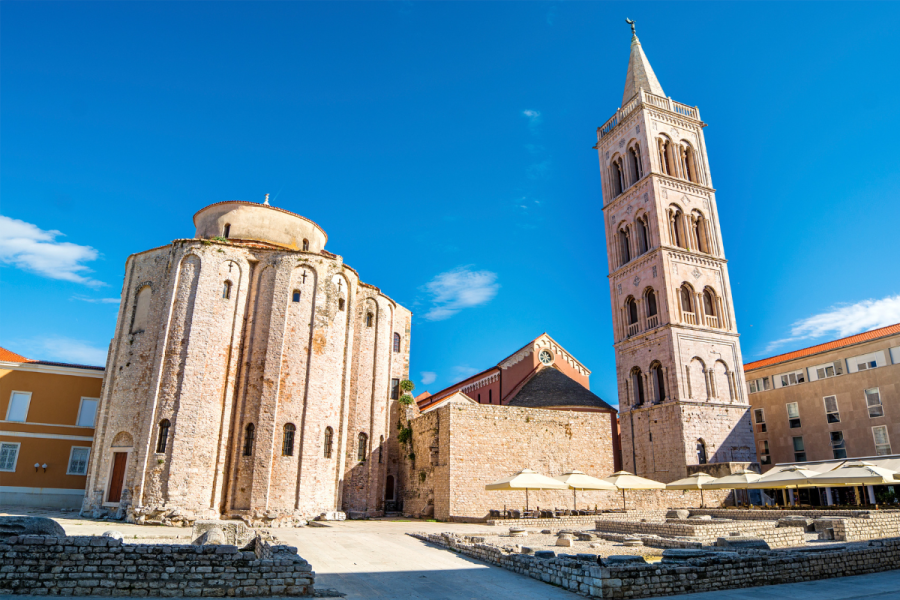 The Musical Evenings in St Donatus

The Church of St. Donatus played different roles throughout the centuries.

During the time of the Venetians, French occupation, and Austria, it had the function of a warehouse. Once Zadar became a part of Yugoslavia, for a while it had the role of an archaeological museum (until 1956).

Today, this church has a completely different purpose.

Namely, it's a host to numerous Musical Evenings on various topics: from the Middle Ages to Renaissance or even early Baroque.

The Musical Evenings are usually held in the summer. They are definitely worth visiting because you’ll get to enjoy the interior of the church, which is an absolute masterpiece, and listen to wonderful compositions by talented composers simultaneously.

For anyone who likes to try something new, this is an absolute win!