Another old historical church building, parts of it were constructed in the early years of 3rd century. Most of the travelers use it to see the mesmerizing view from its top, the bell tower.

The Cathedral of St. Anastasia (Cro: Katedrala sv. Stošije) is a famous Roman Catholic cathedral, as well as one of the favorite tourist attractions in Zadar. Everybody knows that they can’t miss visiting the Cathedral on their trip to Zadar, and you’ll soon find out just why.

Apart from having an undoubtedly vast historical value, it’s of great importance to Zadar and Croatia even in the present. To this day, it has kept the title of the largest church in Dalmatia and the seat of the Archdiocese of Zadar.

St. Anastasia is truly an elegant Cathedral and an absolute pleasure for your eyes. Originating back from the 4th century, it has lived more days than many of us could count.

So if you’re planning on visiting Zadar, let the Cathedral of St. Anastasia tell you its own version of Zadar throughout the centuries. It will be spectacular.

History of the Cathedral of St. Anastasia

The Cathedral of St. Anastasia we know today has had many faces throughout history - in fact, it even changed its name! It has also gone through many wars and has been restored multiple times over the centuries.

During the siege of Zadar by the Venetians in 1202, it was so heavily damaged that it spent the entire 13th century in reconstruction. Once it has been restored, it looked very similar to the Santa Maria della Piazza church in Ancona. The ground, first floor, and bell tower were built in 1452.

The Cathedral also suffered great damage during the bombing of Zadar in WW2. Once again, it had to be reconstructed, hence the present look. 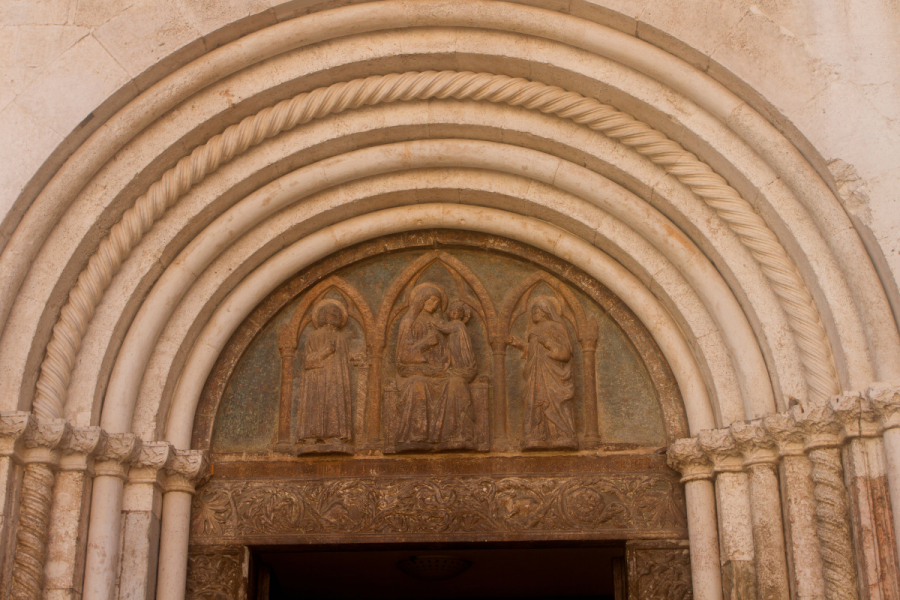 Patrons of the city of Zadar

Zadar is a city that has 4 patrons, and St. Anastasia (Cro: Stošija) is one of them.

The 8th of October is the Day of the patron saint of St. Šimun. He’s mentioned in Luke's Gospel as the person who prophesied that Jesus would bring salvation to all nations. He also predicted that there would be resistance among the people.

St. Anastasia is celebrated on January 15. She was the martyr after whom this cathedral was named. She knew St. Krševan, another patron of Zadar and followed him until his death. St. Donat brought her relics to the then church of St. Peter (now St. Anastasia) and that is where the name of the cathedral came from.

The 24th of November it is a big day for the people of Zadar because that’s the day they celebrate the patron saint of St. Krševan, as well as Zadar City Day. Just like the previous 2 patrons, he also has a church of the same name.

The fourth and last patron saint is St. Zoilo. Like St. Krševan, lived in the 4th century in Aquileia. There is a legend that St. appeared in his dream. Krševan and told him where he could find his body.

How to Reach St. Anastasia's Cathedral

Zadar is a small town that is best experienced on foot. The main attractions situated in the Old Town are at a walkable distance from one another, making it the perfect way to spend the afternoon.

The St. Anastasia Cathedral can’t be accessed by car directly as that area is a no-car zone. However, there are multiple parking lots just a short walk away. We recommend parking in the Ravnice parking lot. It’s affordable and there are usually vacant spaces even during the peak of the summer season.

The architecture of the Cathedral of St Anastasia

The Cathedral of St Anastasia is an architectural masterpiece. It’s a three-nave Romanesque-style building adorned by many big and small details that create a true showpiece in their unity.

The facade was completed in 1324 and has 2 rows: lower and higher. The lower one is more massive and has 3 portals, and on the upper row, there are two rosettes this cathedral is particularly famous for. The main portal is decorated with a shallow relief of four apostles. There are also numerous statues that create a very fascinating scene, some of which are a statue of a mystical lamb, and statues of the angel Gabriel and the Virgin Mary.

On the right and left edges are the symbols of the evangelists Mark and Luke; lion and bull statues.

Once you witness this cathedral in person, you’ll come to the realization that its interior is just as wonderful as its exterior. The interior is festively decorated and evokes a sense of awe in anyone who enters. As a three-nave basilica, it has a nave and 3 aisles in the interior. The nave is separated from the aisles by gracious Corinthian columns.

The presbytery is elevated, contains choir benches, and a crypt from the 12th century is sitting below. The church has several solemn altars and is decorated with numerous paintings such as the painting of St. Dominic and the Sacred Heart. One altar is even dedicated to the souls in Purgatory.

It is also important to mention the hexagonal baptistery, which has its roots in the 6th century.

And finally, the sarcophagus with the remains of St. Anastasia is located in the apse.

However, the best way to experience all that this cathedral has to give is by visiting it. In person, you’ll really get to absorb all the details and see the cathedral for what it really is - a true gem among sacral buildings. We’re sure that every architecture enthusiast is now booking their tickets to Zadar to see this sensation!

The cathedral is open throughout the year, so you can visit it no matter the season. It opens at 9 am and closes at 8 pm. However, we don’t recommend visiting it during the masses unless you want to attend the mass as well.

Entering the cathedral is free of charge. However, the price of climbing the bell tower is 15 kuna (2€)

If you plan on visiting the inside of the church, remember to dress appropriately.

The Bell tower remains the tallest building in Zadar to this day! Not even skyscrapers go beyond it.

The construction of the Bell tower is an interesting story. The ground floor and first floor were built in 1452, while the upper floors were added from 1890 to 1894. And at the top of the bell tower, there’s an octagonal pyramid with a statue of an angel.

We highly recommend climbing the tower. It’s a great workout and you’ll get to see Zadar from a bird’s view. Doesn’t that sound exciting? As previously stated, the entrance fee is 15 kuna (2€).

And our final tip - take a picture by the church of St. Donatus and the Bell tower. The best Instagram photos are made exactly there!

Did you book your ticket to Zadar yet?